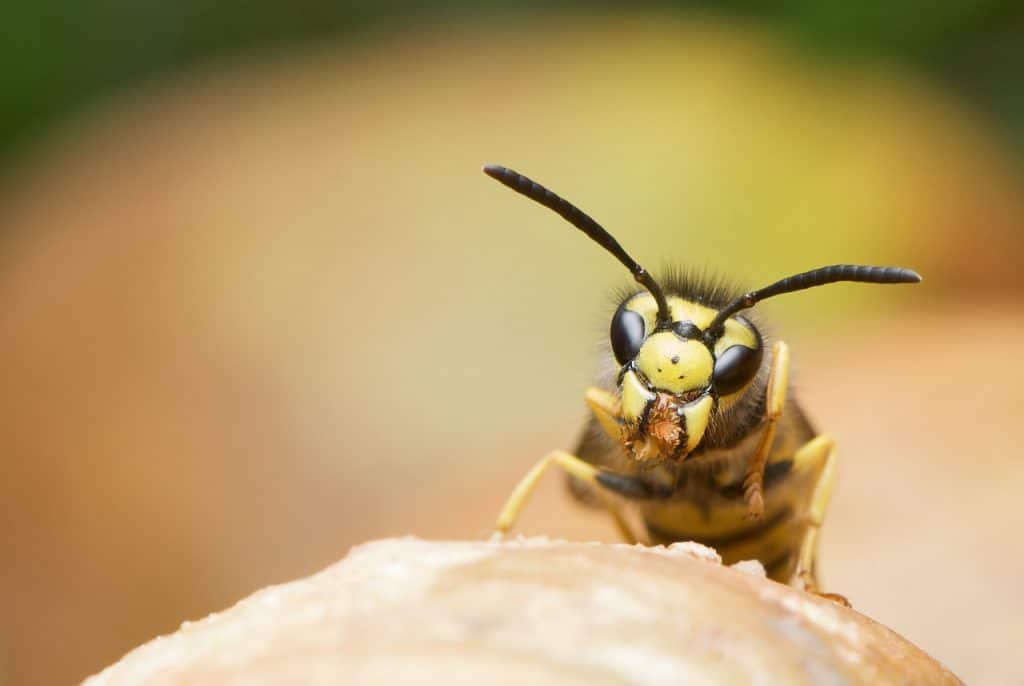 Summer is the season we spend more time outdoors soaking up the sunshine, enjoying long walks, inviting friends round for barbecues, and dining al fresco, either in our own back gardens or at a local public house or restaurant. Although it’s the most popular season in Britain, the endless sunshine and glorious heat has its downside too. Mid-summer also spells the start of the wasp season. So, whether you are enjoying an ice cream at the beach, or tucking into a dessert at a café near you, you may find yourself swatting the wasps away at a rapid rate.

July and August is Essex and Suffolk Pest Solutions’ peak time to tackle wasps in Ipswich and Colchester’s pubs, restaurants, homes, parks, gardens, shops and factories. We provide a prompt wasp nest removal service and can also provide wasp prevention services to homes and local businesses. Meanwhile, if you want some facts and information about these striped pests, here are ten answers to common questions about wasps.

What do Wasps Eat?

Wasps don’t have a mouth, instead they have tubes that they use to suck liquids, such as nectar and sugary drinks. They also prey upon a host of insects, including spiders, ants, flies and caterpillars to bring back to the nest for their young to consume. In return, the larvae will regurgitate this food in a sugary form for the adult wasps to ingest.

How Many Species of Wasps Are There?

According to National Geographic, there are around 30,000 species of wasps worldwide. Only the female varieties sting, although most wasp species are fairly passive and don’t sting. It tends to be the brighter, striped varieties (such yellow jackets and European hornets) that sting.

Where are Wasps’ Most Popular Nesting Places?

The Essex and Suffolk Pest Solutions team has found wasps’ nests in all sorts of locations in the Ipswich and Colchester areas. We have found nests in roof spaces, sheds, porches, garages, chimneys and summer houses. Wasps can also nest in trees, on bushes, hedges, in holes in the ground, or on compost heaps.

Why are They Striped?

The non-stinging varieties don’t tend to be striped and, as they are preyed on by other insects, their colours generally blend in with their background to avoid capture. The bright, striped ones are so coloured in order to serve as a warning to possible predators that they are venomous.

How Harmful Are They to Humans?

Apart from the obvious anxiety that wasps cause when they are buzzing around your picnic table, for a minority of people wasp venom can cause allergic reactions. In the worst case, this can develop into anaphylactic shock – a severe state of shock which can prove fatal. For most people a wasp sting is simply just painful…but, unlike bees, unfortunately a wasp can sting more than once.

Are there any Insects/Species that Prey on Wasps?

Yes, there are various insects that prey on wasps and these can include spiders, dragonflies and beetles. Other species that eat wasps include birds, such as magpies and starlings, and reptiles, including frogs, toads and lizards.

Can Wasps Build Nests in Homes?

Yes, wasps can and do build nests in homes, such as attics and even bedrooms and wardrobes. In recent years a wasps’ nest discovered on top of a bed in a spare room captured the attention of the nation’s media.

Yes, wasps strip material such as wooden beams and plasterboard to make the pulp that is used to build their nests. They take the strips of wood back to their young who turn it into a paste, which the adults use to build their nest. As a result, wasps can damage the fabric of a building.

What Can I do to Prevent Wasps?

One way to prevent wasps is to make sure that all rubbish and sticky food is placed in bins with secure lids to stop wasps flying in and out. Wasp traps are another preventative measure. We sell these at Essex and Suffolk Pest Solutions and can advise you where to place them.

How Can I Get Rid of their Nests?

It’s dangerous to tackle a wasp nest yourself. Instead, the safest and most effective way is to contact Essex and Suffolk Pest Solutions who have experience in wasp nest removal. We follow tough health and safety guidelines and use all the necessary safety equipment for pest control. One way we remove wasps is through the use of insecticide sprays or dusts, and we also have fibre-glass extension lances to eliminate wasp nests at height.

Essex and Suffolk Pest Solutions – Click here for a friendly and effective pest elimination service in Ipswich, Colchester and the surrounding areas.

One comment on “Answers to Ten Common Questions About Wasps”